The more I read, the more I realize how little I know. Philosophy, history, the arts, sciences, you name it. It’s a humbling experience, losing myself in the pages of great writers. I put down my book about every other paragraph to jot down a sentence that absolutely, positively, cannot, must not be forgotten. For example, this one:

It’s on my fridge, right next to the fortune cookie fortune that tells me I am “the crispy noodle in the vegetarian salad of life.” (Whatever that means.)

I learned about famed Japanese director Yazujiro Ozu from The Elegance of the Hedgehog by Muriel Barbery. François Truffaut entered by way of Haruki Murakami’s Kafka on the Shore (or perhaps I should say the entrance stone?).

It’s funny. I heard of classic French films from a Japanese writer and definitive Japanese works from a French author.

To get to the point. From my recent literary wanderings I have compiled a list of films to watch this year. You are my witnesses.

Random side note: I’ve noticed that a good chunk of works titled after nature elements are 99% sad. Think about it. How Green was My Valley. The Sun Also Rises. The Wind that Shakes the Barley. October Sky. Or films with “happy” or “beautiful.” The Inn of Sixth Happiness. The Pursuit of Happyness. Life is Beautiful. A Beautiful Mind.

So … pass the kleenex, please!

Godzilla spawned a bunch of corny sequels with different nemeses like Mothra and Megalon, but I’d like to introduce a much superior one: 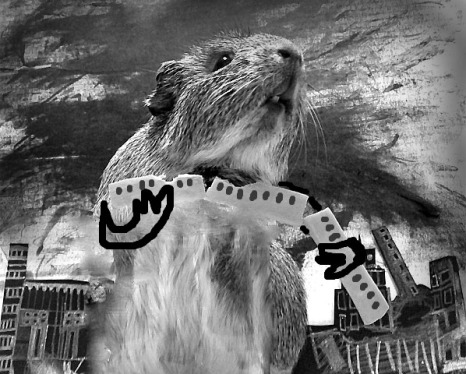 This is Bertha Mason. I adopted her from a guinea pig shelter (yes, those actually exist!) as a companion for Beaver, whom I introduced in a previous post. 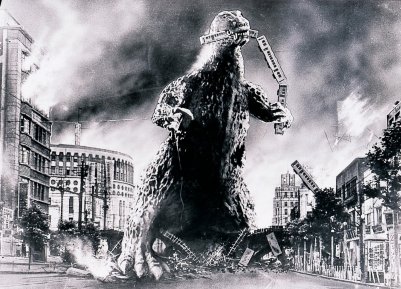 Bertha’s not really into classic films. She prefers Nicholas Sparks adaptations. The Notebook is her favorite (also that one with Miley Cyrus). When she’s not binge-watching Game of Thrones or The Walking Dead, she likes to read James Patterson novels while jammin’ out to Kenny G. on her iPod. 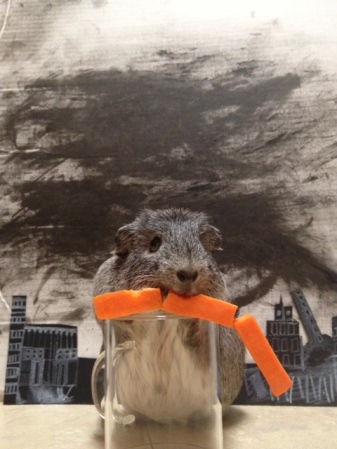 Bertha chowing down mercilessly on a carrot train.

Sadly, she and Beaver didn’t get along. He’s laid-back and Bertha has a dominant personality, so she drove him crazy (hence the name). Thanks to an unexpected new roommate, though, everything ended happily. But that’s for another post. Now back to the film.

The original Godzilla came like a kick in the gut for its target audience, which was still reeling from the Hiroshima disaster and operation Castle Bravo. Hydrogen bomb tests destroy a harmless sea creature’s natural environment. Radioactivity deforms it into a giant voracious monster that emerges on land to forage for food — i.e., humans, and a couple of cows. Daisuke Serizawa, the eye-patched scientist, refuses to kill it with his top-secret formula. Kyohei Yamane, a prominent archaeologist, wants to keep Godzilla alive for research … which would make sense if they had any way to contain it. Yamane’s daughter, Emiko, goes around crying (although it looks more like she’s trying not to laugh), and tripping at crucial running-away-from-Godzilla-moments.

I love the top-secret formula’s name: “The Oxygen Eliminator.” Serizawa insists it can be used for good … in spite of the fact that it removes oxygen from the environment and then liquefies its victims’ flesh. That kind of thinking happens when you’re holed up in a basement lab for years. Plus in its present form, he argues, it’ll be manipulated by politicians. Newsflash: nothing’s safe from that in any form. When the others attempt to persuade him to use it, he tries to destroy it — in a scene that reminded me of this great Mitchell and Webb skit:

I thought ———— SPOILER ALERT!!! ———– Serizawa’s sacrifice in the end was needless. They could have pulled him up with the rope after he detonated the Oxygen Eliminator. Maybe the producer was trying to make a point — the scientific community suffers when its discoveries are manipulated for personal gain.

Godzilla surprised me. I walked in expecting a goofy, B-type film with no substance, just shots of a monster terrorizing Tokyo. Instead I saw a sombre, dialogue-driven film denouncing war and atomic weapons. The acting is powerful, the dialogue thoughtful, and the special effects — for the most part — are impressive for the time. Godzilla depicts the toll weapons take on society, regardless of their shape. If ever there was a film promoting peace, this is it.

Harold Lloyd’s portrayal of life minimum-waged among bloodthirsty department store throngs will resonate with those who’ve worked on the other side of the counter (and that probably accounts for most of us in the 99%).

The classic 1923 silent comedy follows the misadventures of “The Boy,” who works as a lowly sales associate in The Big City.

It’s so accurate I’m convinced the film’s creators worked at Bloomingdale’s or Macy’s at some point. Not much has changed since then. That the phrase “Safety First,” which the film’s title parodies, is still used in corny mandatory safety videos just confirms it (John ignored safety first rules and stood on the top ladder rung. Now he’s dead. *Cue ominous music*). And the scene where hordes of sale-crazed shoppers attack The Boy could come straight from a modern-day Black Friday free-for-all.

It brought back fond memories. There’s this one scene where a matronly patron asks to see every bolt of cloth on the shelves. In the end she leaves with just a tiny free sample. My experience was similar, only it involved king comforter sets and the tallest shelf in the store. Ah, retail. How I … don’t miss you.

The Boy promises his fiancé, The Girl (Mildred Davis), he’ll send for her as soon as he makes enough money for them to get married. Of course he lies, writing that he’s making gobs of money and ordering peons around when in reality he’s a lowly clerk behind on rent in the ratty apartment he shares with “The Pal” (Bill Strother, who has a fantastic albeit stomach-churning scene reminiscent of Ebbet’s famous photograph).

To prove his fabulous success, The Boy buys her a pendant — instead of paying rent — then later a matching chain (instead of paying rent). So naturally The Girl takes matters into her own hands and heads on over to The Big City to marry him. Seeing as he’s so wealthy and all…

This of course presents a problem for our endearing, not-quite-so-honest hero, and he concocts a scheme to attract customers to the store in exchange for prize money. The idea? Have his friend scale the store building. Only he can’t make it at the last minute, so guess who does it instead?